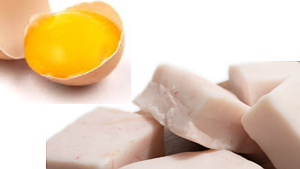 Egg Yolk and Pork Fat are now considered among the best and most nutritional foods in the world.

Apparently we had it all wrong. According to a new nutritional study conducted by top scientists and as reported by the BBC, Pork Fat now is the 8th most nutritional food you can eat. A good source of B vitamins and minerals. Pork fat is more unsaturated and healthier than lamb or beef fat and has been given a nutritional score of 73 on 100. Now this comes after egg yolks, having been virtually banned from any healthy kitchen, now are also considered one of the top foods in the world. Egg yolks have been wrongly criticized due to their cholesterol content. But studies now show that you don’t need to be worried about dietary cholesterol, because cholesterol in the diet doesn’t raise the “bad” cholesterol in the blood. OK. So whole eggs are an amazing food. The yolk is where almost all the good nutrients are found, throwing it away is the wrong thing to do. OK. So pork fat is good and even maybe better than olive oil. Guess it’s time to redo our shopping list.